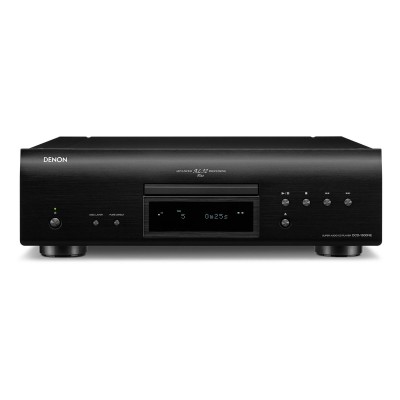 Denon is one of the rare audio brands that continued to actively develop Hi-Fi components and accumulate, refine, and pass down Hi-Fi audio technologies. The DCD-1600NE focuses on achieving the essence of a disc player: ultra-high precision in reading discs and supplying high-quality audio signals to the amp. To achieve this, the signal paths are as short as possible and the whole circuitry is minimised. The engineers also redesigned the disc drive mechanism brackets and the chassis to eliminate vibration, the great enemy of disc players, and achieve ultra-vibration-resistant performance. The information on the disc is now read with impeccable accuracy and a clean, high-grade signal is supplied to the DCD-1600NE’s Advanced AL32 Processing Plus circuitry. Besides CD and Super Audio CD playback, the DCD features playback of audio recordings up to PCM192/24 or DSD5.6 recorded on a DVD R/RW for full flexibility and extended access to high resolution audio.

The DCD-1600NE is equipped with Advanced AL32 Processing Plus, the latest version of Denon’s analogue waveform reproduction technology which utilizes unique data interpolation algorithms and also supports high-resolution sound sources. These algorithms interpolate points that should exist before and after the points in large quantities of data to achieve a smooth waveform that is close to that of the original signal. By carefully restoring data that was lost during digital recording, the resulting playback sound is highly detailed, free of interference, accurately localised, richly expressive in the lower range, and beautifully faithful to the original sound.

The DCD-1600NE’s disc drive design contains high-class S.V.H. (Suppress Vibration Hybrid) Mechanism. The circuitry that controls the pickup and decodes the signals read from the disc has been newly developed. Signal paths have been shortened to an absolute minimum and circuits have been miniaturised to ensure that excess current or noise will not occur.

An S.V.H. Loader of a hybrid construction combining different materials gives stability to the disc drive so that the disc can be read with utmost accuracy. In addition, the mechanism’s low centre of gravity suppresses any vibration occurring inside the mechanism due to disc rotation, and the mechanism structure also effectively suppresses external vibration. By eliminating unwanted vibration, servo-related operations are minimised, and by also minimizing unnecessary controls and current consumption, digital signals can be read from the disc with optimum accuracy under stable conditions. 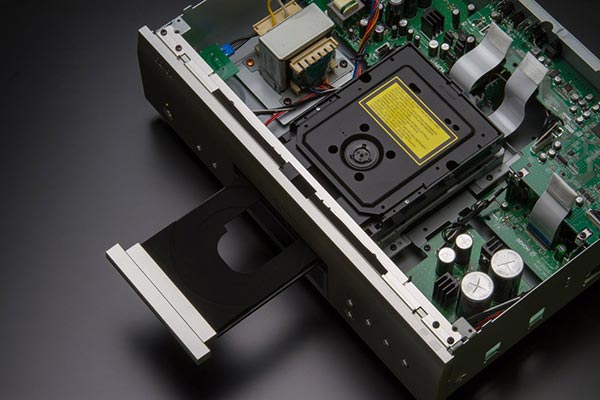 In addition to CD and Super Audio CD, the DCD-1600NE can play DSD (2.8 Mhz / 5.6 MHz) files and high-resolution files up to 192 kHz / 24 bits recorded on DVD-R/RW and DVD+R/RW discs. Music files with sampling frequencies of up to 48 kHz recorded on CD-R/RW discs can also be played. 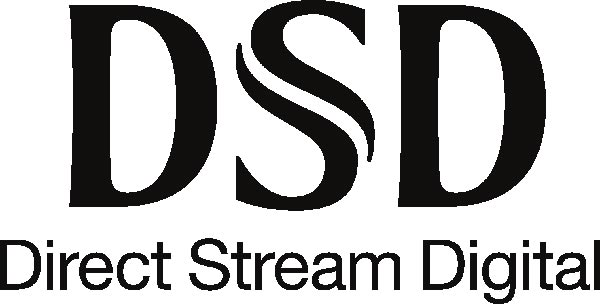 The integrity of musical signals deteriorates when they are subject to internal vibration caused by disc rotation or the power transformer, or to airborne vibration caused by sound pressure from the speakers. To guard against such influences, Denon engineers designed a vibration suppression structure they called “Direct Mechanical Ground Construction”. In this design, the power transformers – themselves a source of vibration – have been placed close to the feet of the DCD-1600NE where unwanted vibration is funnelled directly to the ground and prevented from affecting nearby circuitry. Also, by placing the drive mechanism – the part with the greatest mass – low in the centre of the chassis, the low centre of gravity effectively absorbs internal vibration caused by disc rotation and also protects the mechanism from external vibration. 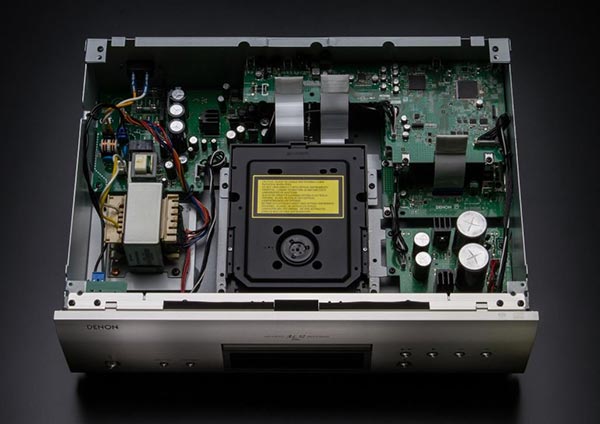 To accurately synchronize digital circuits, the DCD-1600NE’s DAC Master Clock Design treats the DAC as the master when clock signals are supplied. Positioning the master clock immediately adjacent to the D/A converter (DAC) suppresses jitter and ensures optimum precision in D/A conversion. In addition, the quality of the clock, which becomes the reference for semiconductor operation, is extremely important for ensuring that the digital audio circuitry performs at its maximum potential. The DCD-1600NE thus employs a clock oscillator to dramatically reduce phase noise that is the displacement of frequencies. The clock power circuit has also been vastly improved to bring out the full potential of the high-quality clock’s performance. A conductive polymer capacitor with particularly outstanding high-frequency impedance characteristics for Denon’s renowned sound quality has been placed at the base of the clock’s power source, and an ultra-compact film capacitor that is different from layered ceramic capacitors has been placed close to the clock, to achieve an improved S/N ratio and a transparent sound with superior spatial expression. The DCD-1600NE is equipped with two clock oscillators, one for each sampling frequency (44.1 kHz and 48 kHz), that can be switched between the frequencies to thoroughly suppress jitter. 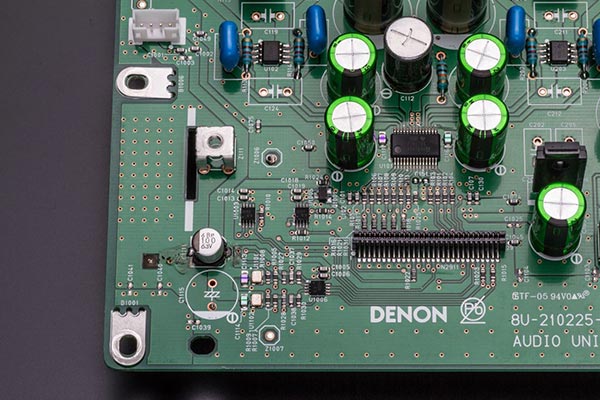 The “simple & straight” design philosophy has been thoroughly implemented in all of the DCD-1600NE’s circuits. Circuit patterns have been redesigned from the ground up to make signal paths as short as possible and ensure that the original sound is faithfully reproduced across the sonic spectrum. As a result, interference between circuits and between left and right channels as well as adverse influences on audio signals are minimised, producing a clean, highly transparent sound. Moreover, the power units for the digital and analogue circuits, whose signals have different characteristics, have separate transformers to eliminate mutual interference and noise. An aluminium plate has also been combined to the underside of the steel transformer base to strengthen rigidity.